The heat waves that gripped the Pacific Northwest last summer made headlines for historic temperatures in a region known for its moderate climate. Over the course of two heat waves – including a record-shattering one at the end of June – unprecedented temperatures created a dangerous public health crisis and threatened the health of fisheries and crops, including hops.

Across the beer industry, there were concerns about how the extreme heat would affect the hop harvest. Fortunately, the timing of the heat wave worked in the crop’s favor, resulting in minimal impact.

However, with extreme weather events becoming more common, the heat wave served as a valuable reminder about the importance of supply chain resilience and the need for brewers to diversify the sourcing of their hop portfolios.

Known for its reliably moderate and temperate climate, last June the Pacific Northwest experienced bouts of unrelenting heat, with Yakima and Portland hitting record-setting temperatures of 108°F and 116°F respectively. For context, that’s nearly 30°F above the seasonal average for both cities.

But while the heat wave affected the entire Pacific Northwest, it did not impact hop-growing regions equally.

The way the heat wave impacted different growing regions within the Pacific Northwest underscores the importance of establishing a diverse supply chain. Sourcing hops from multiple growers across Oregon, Washington, and Idaho offers risk mitigation. While the region shares commonalities, it is large, is diverse, and features unique terroir, resulting in varied conditions even within the same weather event.

The Impact on This Year’s Hop Crop

The heat the Pacific Northwest endured isn’t ideal for hop growing. Across growing regions, the hops went through extreme stress that affected varieties in different ways. Some plants experienced wilting. In some cases, bines actually died. In other instances, the heat caused varieties to bloom early or inconsistently, with the stress brought on by flowering creating negative yield impacts in some varieties and harvest timing challenges.

Overall, however, the impact was minimal and varied by variety. While some struggled, others stood up well to the heat. In general, younger plantings were more sensitive to the heat than mature plantings due to their less established root structure.

Although the impact wasn’t as bad as feared, the prolonged heat could have easily resulted in a worst-case scenario if not for good timing. The rise in temperatures happened pre-bloom. Had it happened a few weeks later during bloom, yields would have been drastically impacted.

Scientists estimate the late June heat wave was a 1-in-1,000-year event. While some may find comfort in that stat, the same study found that climate change made it 150 times more likely to occur, producing temperatures “that would have been virtually impossible in preindustrial times.”

But heat is a single aspect of climate change and just one of the challenges that hop producers, and by extension brewers, will have to manage in the long term. In addition to the heat wave, the past few years have seen a spate of extreme and unpredictable weather that threatened hop crops, including smoke from wildfires, a windstorm, and an ice event.

The heat wave taught us a lot. We learned a lesson about which varieties stand up well to heat and which don’t. As a result, the future of hop growing will include more heat and water stress as part of new variety development.

Equally important is the lesson we learned about supply chain resilience. Crosby Hops has always intentionally sourced hops from across growing regions as a means of mitigating risk and ensuring we can provide brewers with the hops they need. However, that balance has traditionally been more intuitive than a formal process that’s measured.

That intuition has served us well, enabling Crosby Hops to diversify our sourcing and offer brewers access to a balanced, risk-managed hop portfolio. 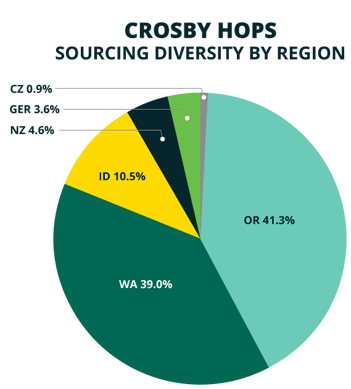 While intuition landed us in a good place with supply chain resiliency, we will be more intentional with our sourcing and consistently measure and track our sourcing to ensure a healthy balance for us and the brewers we partner with.

Brewers Must Be Proactive

Going forward, supply chain resilience will be a critical topic for breweries of all sizes. A resilient hop supply chain offers the confidence that should a weather event impact hops in one region, you’ll still have access to them in another region.

That type of resiliency starts by partnering with a forward-thinking hop merchant. In many ways, your supplier should be akin to a financial manager, proactively mitigating your risk by investing across a diverse portfolio to ensure you have the hops you need and that you’re never so impacted by an event that you’re left in a desperate spot.

To achieve supply chain resiliency, when engaging with hop merchants, breweries should ask lots of questions and:

2021 was a close call. Ultimately, the crop came in fine, and harvest was a success. But the June heat wave won’t be the last extreme event to threaten hop crops. Now and in the future, breweries that diversify their hop sourcing will be better positioned to source the hops they need in the event destructive weather disrupts the supply chain.