Make an Impact Without Leaving a Footprint

Quality is at the core of what we do. It’s a point of pride and part of our mission to deliver consistently high-quality hops that brewers can count on every time. However, equally important is our commitment to being good custodians of the planet – sustainability is another of our core values.

With CGX™ Cryogenic Lupulin Pellets, we’re proud to introduce an innovative product that checks both boxes, offering a new format of Crosby hops that reflects our lofty standards and has a positive impact on the planet.

We often say that quality is a choice. And now, with CGX, we’re able to offer a more sustainable pellet that allows brewers to choose great hops that benefit the environment. The very nature of CGX – concentrated lupulin pellets with roughly twice the oils and resins as T-90s – means that by using them in the brewing process you can reduce your carbon footprint. 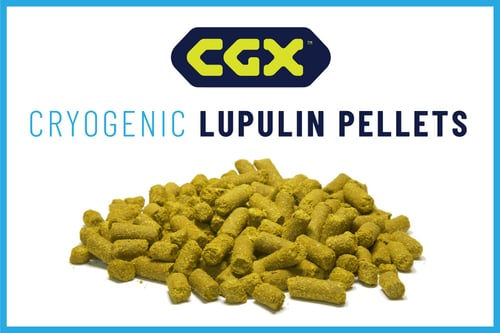 5 Ways CGX Has a Positive Impact on the Planet

While the process for creating CGX is complex, the math behind its sustainability is simple. The increased potency provides a green value chain that impacts everything from packaging and shipping to refrigeration and wastewater.

Over the past several years, we’ve made great strides in becoming energy independent. What energy we don’t produce on our own via solar panels we get by purchasing renewable energy through PGE. To that end, the facilities used for processing CGX are powered using 100% renewable energy.

The ability to use concentrated lupulin pellets that are up to twice the potency of T-90s provides significant benefits to brewers, including only needing to use half as many hops.

That reduction in volume means that we’re able to use roughly half the packaging to give you the same dosing as used for T-90s. That’s half the cardboard being introduced to the environment and, perhaps more importantly, half as much foil, which is not recyclable.

The need for smaller volumes and the ability to use less packaging also means that it takes less fuel to ship a single box of CGX than is required to ship a box of T-90 pellets. That translates into less fossil fuel being consumed per order and fewer carbon emissions being put into the air.

When CGX gets to your brewery, smaller volumes and fewer boxes translate into less refrigeration required to maintain your hops at the appropriate temperature.

Not only does that mean that you draw less electricity from the power grid to keep them cold, but you’ll also reduce the number of refrigerant particulates released into the atmosphere, many of which are known to impact the ozone layer.

One of the great benefits of CGX is that it reduces trub loss, which has a significant impact on brewing yield and revenue per batch. But the reduction of trub also benefits the environment. While there are efforts to use trub and spent grains for livestock feed, trub often ends up in wastewater and aquatic ecosystems.

When it goes into wastewater, trub increases the demand on utilities to treat the water. When it finds its way into the environment, the compound in trub can harm aquatic life and “can lead to high rates of mortality among fish and benthic organisms.”

CGX helps reduce the amount of trub that can be introduced to vulnerable systems beyond your brewery walls.

An Easy Way to Make an Impact

The efficiencies gained by CGX in the brewing process help breweries that are wrestling with increasing costs and narrowing margins. But a significant parallel benefit is the positive impact that CGX has on the environment. While reducing their carbon footprint may not be the first reason that every brewer turns to CGX, it is a built-in benefit that makes it easy for everyone to be better stewards of the planet.

As the climate increasingly becomes more unpredictable and continues to impact our day-to-day lives, it will be important for companies to offer consumers sustainable products. With CGX, we’re happy to offer a more sustainable hop format that delivers the same exceptional quality we, and you, have demanded of the Crosby name.

CGX is now available for contract orders and spot purchase.